Before we get into the weeds, let me ask you three questions:

Were you ever not promoted or not gotten a raise at work because you did not ask for it?

Did it happen after you had worked for it, and wanted to ask for these things?

Did a friendship or a relationship (personal or professional) fade away from your life because you did not have a conversation that needed to be had?

Did it happen when you had intentions to keep the friendship/relationship?

Have you ever committed enthusiastically to doing something, but had a hard time following through when the time came to execute it (e.g., a habit, exercise routine etc)?

Has it happened for something that was very important for you?
If the answer to any of these three questions is a yes and especially if the answer to subquestions 1a, 1b or 1c is a yes, you likely avoid hard conversations to the point that you might be compromising your success and fulfillment because of such avoidance.
I am not new to these hard conversations, and more so their avoidance. Some I have avoided for years, to my own detriment. But some I have had, and those make me proud of myself.

The one that sticks out in my mind is the one I had in 2017 that changed the course of my career, towards a more fulfilling one. I was a research scientist at Facebook (now Meta) for over six years by that time. The work was interesting, and challenging, and it paid very well. But it was not something that my soul connected to.

It took me about three years from the time I decided to leave, to actually leaving. In order to do something different, do something that I connected deeply with.

Between two parts of myself who were conflicted in taking the job or not.

Between me and my family.

Are you willing to invest in yourself and learn to have such hard conversations with relative ease? This is what this course is about.

If difficult conversations are so beneficial, why do people not have them? Well, because they are difficult. Go back to questions you said yes to, and feel why you are not having them? Reaching out for the emotional and cognitive gap we have is essential to understanding our behavior. That will be the first part of the course. We will dissect what makes the hard conversations hard. It usually boils down to a feeling we are unwilling to feel while having these conversations, or some specific skills we are lacking (latter is much less common than we think).

Here are a few examples of people I have worked with who have achieved amazing results because they were willing to engage in uncomfortable (and respectful) conversations.
Mr. D was laid off at the start of the pandemic, and needed to find a job quickly in the Bay Area otherwise he feared he might have to leave the country. We worked on his fear and panic, and once that was calmed down, he was willing to engage in difficult conversations with the recruiters. They were made even more difficult for him because he really needed a job fast. But with a few small behavior tweaks, he pushed through the discomfort, and got $175,000 more than his previous job.
Mr. S was working “two levels above” his current level (in his own words), but was not getting promoted. And he could ask for it. After our conversations, we realized he felt greedy asking for a promotion. He thought such asking would taint his “commitment” to the job. He was afraid of his manager’s perception of him. We worked on his limiting beliefs, and what was really going on under the surface. It took us three months to prepare for an emotionally gut-wrenching conversation asking for a promotion mid-cycle. The conversation lasted a few minutes, and he got the promotion within 3 weeks of that.
Ms. R from Bangalore was a founder of a company based in Bangalore and Bay Area. She felt undervalued and underappreciated in her role. After a couple of conversations with me, she was willing to engage in a difficult conversation with her founders. Her biggest concern was that she did not want to confront anybody. We organized the conversation in a respectful way, and she got a 80% raise in her compensation and switched her role to a more executive role.
These are just a few examples where difficult conversations have brought success and fulfillment in the lives and career of people I work with. I have worked with over hundred people and noticed patterns that I am going to distill in this course.
A large part of the course will be devoted to preparing for how to have those hard conversations.

We will explore both tactical and strategic ways of working with our underlying beliefs (e.g., hard conversions destroy relationships), and past experiences that create resistance in having these hard conversations.

We will spend time on how to prepare for these hard conversations well before the conversation is underway. This is a crucial time that often determines the results.

We will discuss tools to use and mental models and mindsets to deploy during the hard conversations. Typically, our old beliefs and behaviors surface without us knowing, and we will discuss things one can do in a few seconds to get things back on track. In the example of Mr. D above, one of these practices of becoming conscious of one’s body and breath took only about 5 seconds, and made a huge impact in terms of his success.

We will talk about what to do after such hard conversations to rejuvenate yourself, and in many cases when it is an ongoing conversation, how to lean into preparation for the next iteration right away. 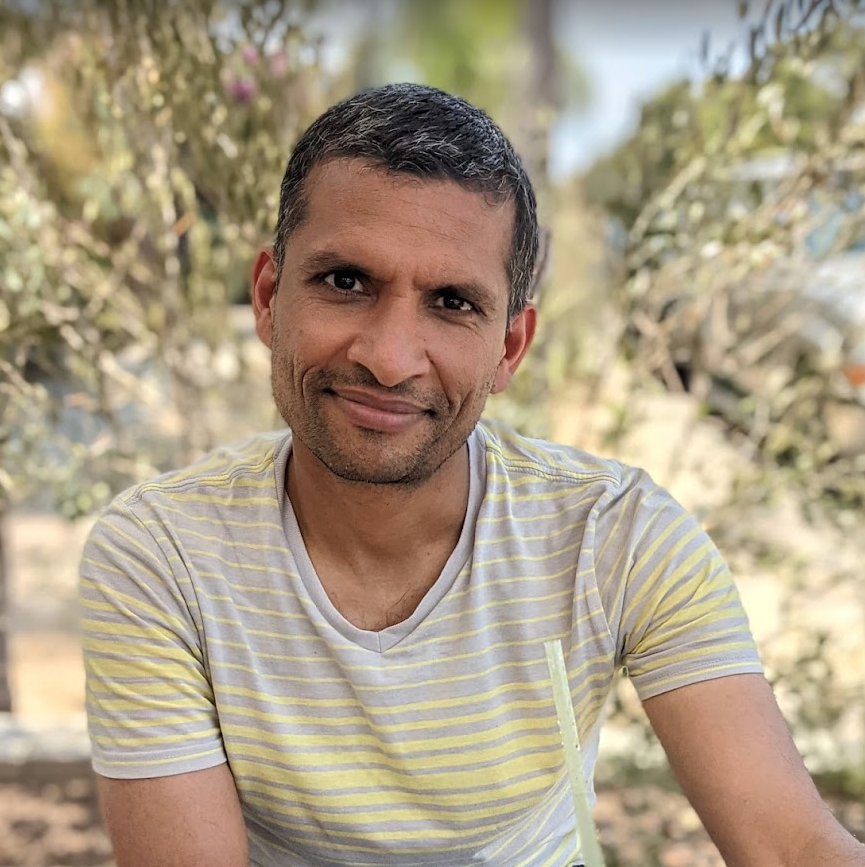 Yogi is a coach who helps and supports people with their work, relationships, and personal growth.
The common theme among all these areas is ability to have difficult and uncomfortable conversations with others, and with yourself. If you are not getting what you want and desire, there is a hard conversation you are avoiding somewhere in your life. Yogi loves helping people figure out where they might be stuck, and helping them get unstuck.
Yogi did his B. Tech. (B. S.) in Computer Science and Engineering from IIT Kanpur, where he earned the President's Gold Medal for his graduating class. He received his PhD from Cornell University and taught university courses at Cornell and University of Waterloo. He worked at Facebook as a Research Scientist for over six years. He has struggled with difficult conversations ever since his childhood, but developed the skill and ended up negotiating an offer north of a million dollars in Silicon Valley. But he decided to leave software engineering to follow his passion of working directly with people, teaching, and coaching.
Come join Yogi to learn the critical skill of doing hard conversations with ease.

Would you like to teach what you love as well?